Since our founding in 2003, PYC has performed regularly with the Oregon Symphony, the Oregon Ballet Theater, Pink Martini, Metropolitan Youth Symphony, and the Portland Youth Philharmonic.

In March, 2008, 2012, 2014, 2018, and 2022, PYC performed for the American Choir Directors Association’s regional conferences in Vancouver BC, Seattle, Portland, and Spokane.   Other highlights of PYC’s past seasons:

In February, 2012, Cascadia performed parts of Leonard Bernstein’s “Mass,” including the male solo part, with Vancouver Bravo! in Vancouver, Washington.

Additionally, all the younger choirs performed at The Grotto, PYC’s annual winter and spring concerts at Trinity Cathedral, and at adult retirement communities, churches, and local schools.

In the spring of 2010, Chanticleer organized the First National Youth Choral Festival, which included twelve choirs from across the country. PYC’s Chamber Choir spent four days in intensive interaction with the members of Chanticleer, who coached them in all areas critical to the choral art. The climactic event, “The Singing Life,” featured Chanticleer and the choirs in a daylong residency at San Francisco’s Davies Symphony Hall, where the choirs were given the opportunity to perform individually on the stage and attend vocal master-classes led by mezzo-sopranos Frederica von Stade and San Francisco Opera’s Zheng Cao.

In March, 2009, the ACDA celebrated their 50th anniversary at the National Convention in Oklahoma City. PYC was the only youth choir from the Northwest selected to perform at this conference.

In the fall of 2009, PYC joined four other choirs, including an Estonian men's choir, to perform the ancient/modernist music of Estonian composer Veljo Tormis. The singers were conducted by Tormis’ colleague Hirvo Surva. 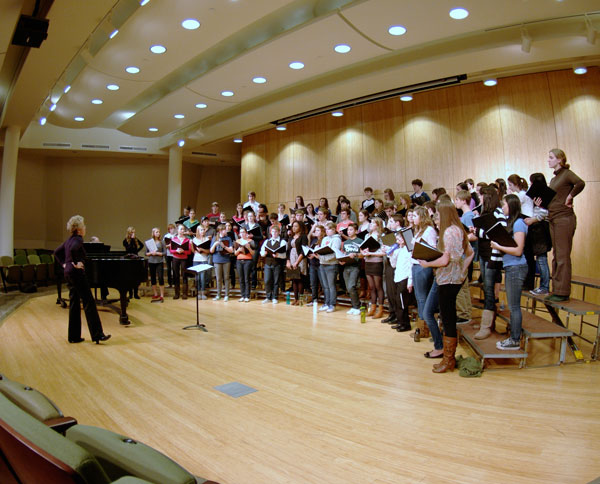